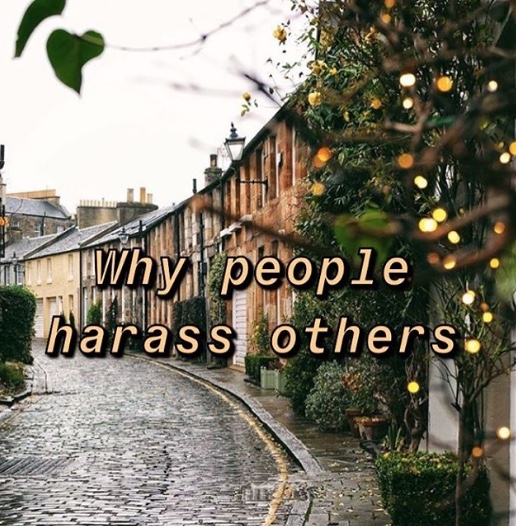 Bullying has lead a percentage of people to feel depressed or have suicidal thoughts, which is why today I wanted to break down the reasons why people bully others. None of these reasons justify bullying, but hopefully understanding the motives behind people’s actions makes it easier to cope with someone mistreating you. A common misconception is that all of the reasons I’m going to list applies to anyone who harasses others, which is not the case. Everyone has different motives.
1. They’re jealous of something you have. This tends to apply more when people talk behind your back. They’ll trash parts of you to other people because they want other people to view you negatively and not wish they were like you.
2. Social status. In most instances of harassment, someone who is “popular” is mistreating you. In pretty much all instances, the “popular” group is just the group of people who party often and are conventionally attractive. In most instances they feel that people are jealous of the way they are, which gives them a lot of power. In order to maintain their power they like to harass others. They want to make you feel like you could never be one of them because they’re insecure of losing that status. Don’t let it get to you.
3. They’ve been bullied before too or had a bad childhood. The problem with this motive is that people start to feel bad for the person who is doing the harassing, but bullying is never justified. No one gets a free pass to be a bad person and hurt others just because of experiences they’ve had.
If you feel that someone is hurting you for no reason, the best thing you can do is just not give into it. Then, if they continue to do this for a while, I would strongly recommend finding a way to stand up to them. Don’t stoop down to their level and try to take them down with petty remarks, but rather tell them firmly to stop, and usually they do.