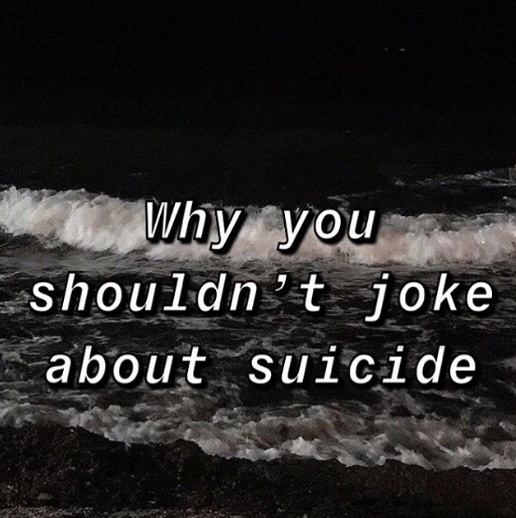 From time and time again I’ve heard people throwing around the phrase “I want to kill myself”, or something along those lines that implies that they want to harm themselves in some way. In most of these instances, the person is just joking around and is trying to express their frustration with a struggle or inconvenience that they’re having. I know that this has become a very normalized thing to joke about, but it is disrespectful to those who actually self-harm or who have suicidal thoughts. I will admit that here and there I used to make comments along these lines, but I have made a conscious effort to stop, because I know that my words have repercussions. In most instances, those who are actually feeling suicidal will likely remain partially quiet about it. These people will likely not post on social media or talk to their friends joking about wanting to hurt themselves. It has been found that in most instances, someone who is suicidal will talk to at least one person about how they feel, but usually not more than this. Those who are actually suicidal mostly talk seriously about the way they feel, since they know that their life is actually at stake. Anyone who currently jokes about being suicidal should recognize that their words are hurtful to anyone who is looking to self-harm. It may make them feel as if their feelings are not justified. It also makes people more reluctant to talk about it, since they feel that being serious about suicide makes them appear as a “twisted” person since people have made suicide a lighthearted topic by joking about it. The next time you hear someone joking about suicide, I would suggest calling them out and explaining why their words are uncalled for. If you or someone you know is having suicidal thoughts I would recommend talking to someone you trust or calling the national suicide prevention hotline at 1-800-273-8255. Stay safe <3